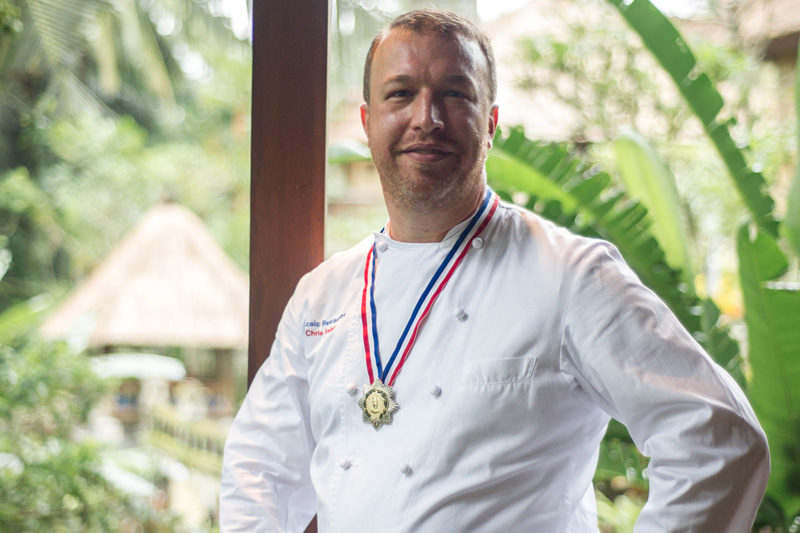 Raised in France, Chris began his training at Le Cordon Bleu in Paris before taking internships in France at Michelin-starred restaurants such as L’Oustau de Baumanière and Lucas Carton. His culinary career brought him to New York where he worked as Sous Chef for David Bouley and then as Chef de Cuisine for Thomas Keller in Napa Valley. During this time Chris developed such awe for Asian cuisine that he accepted a position as Executive Chef of The Legian in Bali, marking his first foray into the Asian culinary scene. In 2001, he opened MOZAIC RESTAURANT GASTRONOMIQUE in Ubud — the cultural heart of Bali.

It was at Mozaic that Chris developed and mastered his own style of cuisine — marrying the techniques of modern French cooking and presentation with the native ingredients and amazing flavors of Indonesia. Mozaic Restaurant is now regarded as one of the best dining experiences not only in Bali but the whole of Asia and has received numerous accolades, including being listed in the Tradition et Qualité – Les Grandes Tables Du Monde, San Pellegrino’s “The World’s top 50 restaurants,” Miele Guide’s “Top 10 in Asia” and receiving the World Gourmet Summit award for “Best Asian Restaurant” in 2017 and 2018.

Mozaic Restaurant is a fresh oasis of ingenuity in the world of gastronomy. The hallmark of its reputation is the uniqueness of the experience, encompassing the quality of the ingredients, the perfect execution, the sheer multitude of flavors, and the quality of the service, all to be enjoyed in a lush tropical garden.

Chris Salans published his first cookbook, Mozaic: French Cuisine, Balinese Flavours, in 2011. This labor of love, which showcases 17 seasonal ingredients from Indonesia through 50 wonderful recipes, took a year to put together, and it won “Best in the World” in 2011 by the Gourmand World Cookbook Awards.

In July 2015, Chris opened SPICE BY CHRIS SALANS in Ubud to great acclaim. This modern air-conditioned gastro-bar offers modern Indonesian cuisine in a relaxed and vibrant atmosphere. It’s a lively and hip café, with an all-day dining concept, that is accessible to all. Spice is based on the same philosophy of infusing food and cocktails with Indonesian ingredients and flavors, based on fresh local produce and

spices. Here diners can choose to sit at the bar counter watching an interactive culinary theatre, with the chef and his team at work; or opt to sit at tables at the front while watching the street life passing by

through massive glass windows. Spice takes its guests on an eclectic gastronomic adventure of taste, touch, smell, sound and sight.

Chris is a dedicated mentor and one of Bali’s top culinary ambassadors, representing Indonesia in print, television, and at international food events.

France (Association of the Master Chefs of France), a prestigious body of international chefs who practice, preserve, and develop the art of French cuisine. Maîtres Cuisiniers de France are often given the highest classification in restaurant guides, and are regularly mentioned in the world’s leading food and travel magazines.

To date, Chris Salans remains one of Bali’s top culinary ambassadors promoting the island as a foodie destination and participating in culinary events worldwide as a Master Chef.