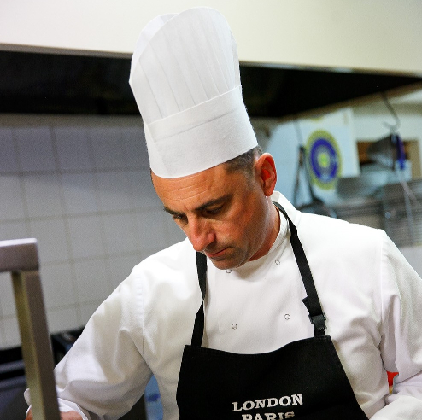 Chef Christophe speaks passionately about fresh, local produce which Bungendore’s providers put at his fingertips, including chestnuts, organic vegetables, fruit and organic meat. Black truffles are in season and Chef Christophe loves to celebrate with you by way of offering special dinners, cooking classes and a daily truffle menu during the current season.

Chef Christophe’s cooking classes are relaxed, fun and hands on. Many participants return again and again for an annual calendar that covers the basics as well as the tantalising highlights of traditional French cuisine. Classes are created by theme and range from patisserie and Christmas sweets to a celebration of truffle season and a tour for the taste bud through the distinctive regions of France. Chef Christophe has a background in training chefs and is a warm and popular teacher, with an approach honed by years of cooking and teaching in France, Europe, the Pacific, the Americas and now Australia. His skill is to teach participants how to make the flavours of the quality produce shine and then to savour their creations with champagne or wine. Traveling, cooking and sharing food is an enjoyable way of bringing people together. Chef Christophe and Josephine offer annual fully guided tours to New Caledonia, France and Italy.