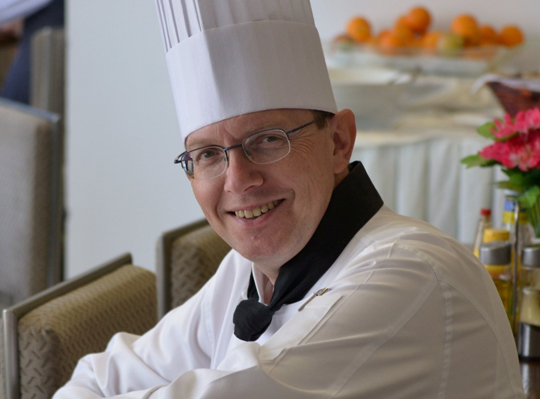 Chef Daniel is from Basel, Switzerland and has worked for five star hotels and fine dining restaurants in Switzerland, the USA, New Zealand, Australia, Japan and the UAE. Hehas also been involved in a number of hotel openings and has had the pleasure of cooking for music legends from Kylie Minogue to Pavarotti, statesmen and Middle Eastern Sheiks during his career.

Chef Daniel is a certified Master Chef as well as a certified WACS judge and has both competed and judged at numerous competitions. In 2008 he was a team member of the Australian national team for the Culinary Olympics in Erfurt, Germany. In 2011 Chef Daniel was invited to join the prestigious AcademieCulinaire de France due to his dedication to the education of young chefs and to the profession in general.

As ConseillerCulinaire, now Honoraire, Chef Daniel organized the regional Chaine des Rotisseurs young chef competitions in Brisbane and Melbourne as well the Australian national competition for several years. Thanks to Chef Daniel the UAE held its first young Chef competition in 2015. This year marks his 13thanniversaryin the international jury panel and over 15 years organizing this prestigious competition for the young chefs.

In 2016 he was accepted as a member of the World Master Chef Society.

Chef Daniel hasbeen training and mentoring the next generation of young chefs at ICCA Dubai,the best professional culinary college in the Middle East which won both City & GuildsLion awards as the International Centre for Excellence Middle East and International Centre of the year 2016. The college was also awarded the best culinary college in the UAE at the Hospitality Industry awards in Dubai 2016.