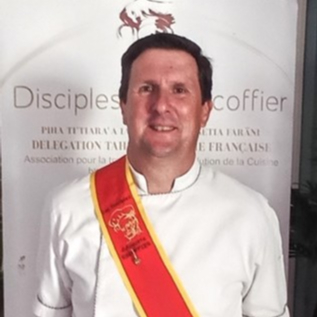 Eric PAUL was born in Lyon in November 72.

After brilliant studies at the hotel schools of Dardilly and Thonon Les Bains, he worked as a cook in starred gourmet restaurants in France and the United Kingdom. His taste for cooking will really be given to him by the Jacob family at Le Bourget du lac, restaurant "le bateau ivre".

The year 92 will be synonymous with the Olympic Games with the chance to work in winter on the Albertville site in Savoie and in summer at the Olympic village in Barcelona in Spain.

In 1996, he tried his hand at teaching where he took off and successfully obtained his certification. It is a pleasure for him to accompany and introduce students to his love of products and refined cuisine.

2020 will be the year of change with a departure for the hotel school in Tahiti. Two years of discoveries and sharing. The meeting on site of two other disciples of Escoffier will see the birth, thanks to Christian Fréchède and Eric Lefaucheur, of a delegation in French Polynesia.

Epicurean, gourmet, gourmet, Eric takes pleasure in strolling through the markets of our beautiful French regions and overseas. The colors and smells inspire her for a light and balanced cuisine. His interest in oenology and cigars enhances his meals shared with family or friends.